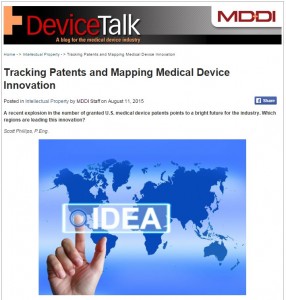 The August 12, 2015, edition of MDDI DeviceTalk features an exclusive guest blog by StarFish Medical President, Scott Phillips.  Tracking Patents and Mapping Medical Device Innovation examines a dramatic worldwide increase in medical device patents granted in the United States. Between 2009 and 2014, this metric has grown by 170% and the trend is observable in all top patenting regions throughout the United States and nations around the world.  That bodes well for Medical Device Innovation.