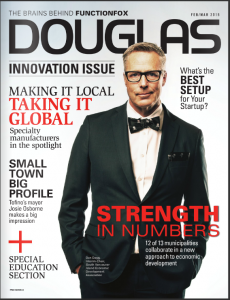 StarFish Medical is among the companies in Making it Local, Taking it Global in the February 2016 issue of Douglas Magazine.

The February 2016 issue of Douglas Magazine features StarFish Medical in an article titled, “Making it Local, Taking it Global.” Scott Phillips, StarFish Medical Founder and President, is quoted and the company’s newly expanded manufacturing space is a featured image. Author, Shannon Moneo, notes the growth of specialty manufacturers on the Island is a sign of an increasingly sophisticated economy.

Mention Vancouver Island’s specialty manufacturing industry and many of us would be hard-pressed to name half a dozen companies that are making and selling highly evolved products to customers around the globe. But in nondescript buildings in Central Saanich or at large premises near Nanaimo, Islanders are proving that unique diagnostic medical tools, specialty air compressors and intricate fishing lures can be designed and built here.

“We make products that are as big as your fist and that cost $10,000,” says StarFish founder and CEO Scott Phillips, “Being on an island hasn’t been a problem.”