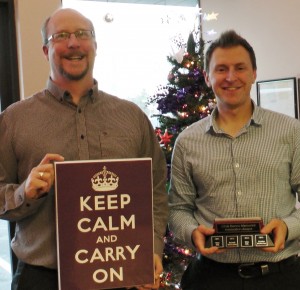 John and Christian display their awards in front of the 2014 StarFish Christmas tree.

Proch-McMechan, an Electrical Engineer, received the Chris Denny Memorial Award for Innovation and Walmsley, VP Product Development, won the StarFish Keep Calm and Carry On Award. Both garnered multiple nominations citing a variety of achievements, challenges, and outstanding performance during a record year for the company.

The Chris Denny Memorial Award for Innovation is awarded each year to someone from the StarFish group of companies who has immersed themselves deeply in a technical problem in order to find a brilliant solution to a client design challenge—as stated, or more deeply.  Chris Denny was a long-time StarFish Mechanical Designer known for his brilliant solutions to the most challenging projects in ophthalmologic ultrasound, intraosseous infusion, electro-surgery and intravascular surgery.  Nominees are solicited from StarFish Group employees and the recipient is chosen by a leadership committee. 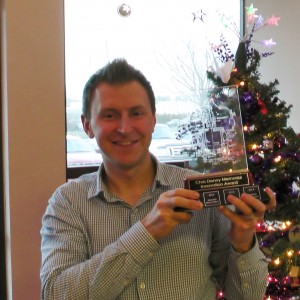 Nominations for Christian describe his contributions:  “Hints from the previous stage of development led (Christian) to an exciting re-spin of the micro PCB boards that included a triangular array of RGB LEDs and photo sensors resulting in datasets that completely map the GI tract. The innovation is in the details of this design and it’s clear that Christian’s attention to detail and creativity is a major factor in the success of this novel (future) medical device.”

“Christian has developed and improved various tools and techniques for measuring parameters associated with EMC testing with considerable success. He demonstrates consistent enthusiasm and dedication to solving challenging engineering problems for our clients. In so doing, he has expanded his own knowledge and comfort with the tools and techniques he’s developed, and has freely shared that knowledge with others in the firm.”

John Walmsley, VP Product Development, presented the award to Christian noting: “Innovation is invaluable to the service we provide our clients.  Christian won’t stop until he gets to the bottom of a technical challenge and he comes up with a great solution.  This year he really came into his own.”

Christian accepted the award thanking his co-workers: “As with everything we do at StarFish, it’s a team success. There’s a lot of input from a lot of people that made the (nominated) design possible.”

The Keep Calm and Carry On Award honors an employee who rises to challenging times with compassion and grace making employees, customers, and leadership feel more confident, positive, and well looked after. It is selected and presented by StarFish Group President, Scott Phillips.

John Walmsley received this year’s award. “He points the way, but never micro-manages. John inserts a steadiness that everyone benefits 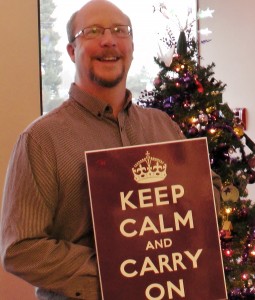 from. He is the first to stay when the need is great and the last to show any stress to the teams when they are down to the wire.  Ever dependable, John continues to mentor at a calm steady pace – often taking the lead in showing by example to ‘take a deep breath’ when needed”, explained one nominator.

“John’s approach to all things exemplifies the phrase “Keep Calm and Carry On”, added another nominator.

“The best reflection of a person is how they manage adversity – at those rare times John is dealing with a stressful or frustrating situation, he always offers constructive resolutions that leave you on a positive note with the confidence that everything will be OK!”, summed up a third nominator.

Scott spoke of his gratitude while presenting the award: “This was a tough year to choose a single recipient as there were a number of wonderful candidates and impressive nominations.  I am especially pleased to award this year’s Keep Calm and Carry On award to John Walmsley.  John received nominations commending his skills and diplomacy in a wide variety of challenging situations throughout the year.  It’s wonderful to see his team recognize and appreciate such skillful leadership.”

John accepted his plaque with the very aplomb that earned him recognition.  “Those are very kind words.  Hearing the nominations was great.”