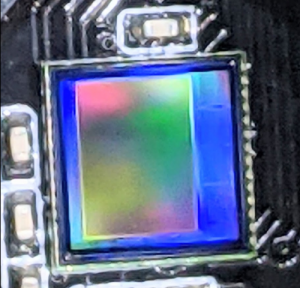 The sort of device I’m speaking of achieves its measurement by illuminating something and collecting the scattered or transmitted light. For this conversation, that “something” could be part of a patient, or maybe an assay involving a sample from a patient.

With a device like this, there are two main things to worry about: controlling the system state and collecting sensor measurements. The system state could include light sources, focus mechanisms, shutters, galvanometers, or even some aspect of an assay process. The sensors are of a sort that generates relatively high bandwidth signals, such as cameras, spectrometers or photon counting modules.

Typically, several measurements at various states are required to quantify correctly. It may just be combining measurements with and without illumination. Or there may be a whole sequence of light sources required. Often multiple measurements are required throughout an assay process. More sophisticated modulation is frequently used to minimize external sources of noise, such as ambient lighting.

In such a system, the control of the state is typically achieved over a different interface or communication channel from the sensor measurements and these are asynchronous with respect to each other. The latency of these channels is typically highly variable and unpredictable. As a result, the certainty of the system state for each sensor measurement becomes muddy. There isn’t sufficient phase information about the system state within the signal measurement.

So, what’s the problem?

Imagine a camera sensor integrating an optical density measurement of an assay. If the sensor begins integrating a little after the light source turns on, the resulting pixel values will end up lower than expected. If this delay is not repeatable, then not only is there an error but it also is not even a repeatable one. Similarly, if there is an unknown delay between a focusing mechanism and the captured images, at best the focusing process will be slow; at worst the wrong focus setpoint will be chosen. The more complex the sequence of states, the more critical it will be to precisely know the phase within the sensor data in order to maximize medical device optical signals.

What are the solutions?

Fundamentally, the aim is to introduce a clear knowledge of state within the sensor data. That enables decoding the signal from the sensor data without worrying about latency issues. There are two main methods to achieve this: either use the sensor to capture the state, or synchronize the state to the sensor. Which route depends on the sensor.

Some sensors have the capacity to sample digital input pins during signal acquisition and send these values along with the sensor data. Others can drive output pins synchronously with signal acquisition. Either of these mechanisms can be used effectively. Be aware that some sensor modules have these functionalities but are not sufficiently synchronous to solve our problems.

It is not always possible to choose or design the perfect sensor. Instead, for strategic reasons, an OEM sensor is chosen that may not have desired features or timing capabilities. The rationale is usually based on reducing the overall program timeline or cost. This often comes with a risk that there will be gotchas in the implementation, such as the timing issues we’re discussing now. I’ve had to deal with this particular issue many times, with many different sensors. Even sensors that appear to have the input or output capabilities that could solve the issue, if controlled asynchronously from the acquisition are not really helpful. Sometimes there’s a partial solution, like a sync pulse output. One can lock into the integration period of the sensor, but will still have to figure out the overall system state by some other means.

Ok, what else can be done?

In the case where the system state is clearly discernible in the measured signal, one might be ok. Sometimes augmenting this will make it more clearly detectable. An example here might be to detect the dark frame of a sequence of frames and key off of that.

It becomes more challenging if one doesn’t know when the sensor integrates. An approach that has worked for me in the past is to discard measurements that occur at the edges of the state transitions.

For the situation where the state changes are not easily discernible in the signal due to the noise floor, I have succeeded by slowly and smoothly modulating the state – in this case, it was the light sources – and using matched filter techniques to synchronize with and extract the signal.

To generalize, without a strong signal and good timing information, the only remaining lever is to slow the system down. If it is possible to get away with a sample rate that is much slower than the timing uncertainty then the results will likely be ok. If slowing acquisition down is not an option then there really is trouble.

Try to make accurate time measurements, both for sensor signals and control signals. We may not know the relative latency of each communication channel but knowing time is never bad. Try to devise a mechanism to measure and adapt to the channel latency. It may turn out that the latency is fairly stable when measured. Try to build landmarks into sensor signals. For instance, dark frames are often easy to spot.

Keeping sensor and control signals correlated is a pretty common challenge in Medical Device design, particularly with optical measurements. Evaluating architectural choices as early as possible at least prevents this risk from being pushed too far down the road. If it becomes an issue, there are still a few tricks available to overcome it and maximize medical device optical signals.

Kenneth MacCallum, PEng, is a Principal Engineering Physicist at StarFish Medical. He works on Medical Device Development for a variety of areas including ultrasound applications. Kenneth would enjoy hearing from readers about their reference designs and experiences.