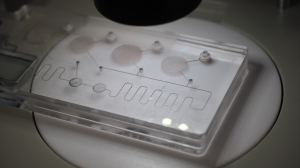 Optical systems play an important role in microfluidic platforms. Such systems are the most reliable apparatuses for measuring the outputs of assays on microfluidic cartridges.

A number of sample preparation steps can be automated on a microfluidic cartridge. These may include mixing, incubation, evaporation, dilution, reconstitution, metering, extraction and more. Once a sample has been prepared, it can be transported on the cartridge to a detection area. Optical detection methods are the most common methods used for quantifying the properties of a prepared sample in a microfluidic system.

How can lenses be built into microfluidic cartridges?

Lenses are an integral part of many optical devices that use light to affect a sample, detect a quantity of light, or take an image of a sample. While many microfluidic systems use external lens systems, lenses are a component that can often be cheaply and robustly incorporated onto a microfluidic cartridge. The simplest examples are static lenses (i.e., lenses that don’t change over time). Simple static lenses can be manufactured directly onto cartridges. For example, curved surfaces manufactured directly into the microfluidic channels can act as cylindrical lenses.

Alternatively, periodic arrays of many very small lenses (called microlens arrays) can be manufactured and adhered over a cartridge’s detection area to allow for simultaneous detection at multiple sites.

It is also possible to incorporate lenses with variable focal lengths on microfluidic cartridges. One example is lenses that consist of fluid-filled reservoirs behind flexible plastic membranes. The curved membrane, along with the liquid contained therein, acts as a lens. The curvature of the membrane can be changed by adjusting the internal pressure, thereby changing the lens’ focal length.

In a different type of fluid-filled lens, two different fluids having different indices of refraction are mixed on the cartridge in a variable ratio. The mixed fluid is then pumped into the lens, thereby allowing the effective index of refraction of the lens to be controlled, which changes its effective focal length.

As illustrated above, there are many options for incorporating lenses onto a microfluidic cartridge. Integrating the lenses into the cartridge can reduce the footprint of a platform, and can allow for automated control and passive alignment of parts of the device’s optical subsystems.

What optical measurements can be done on a microfluidic cartridge?

Optical methods that detect a quantity of light are typically used for quantifying or detecting the presence of a given analyte in a sample. Some of the sample properties that can be investigated optically are:

Absorption: The amount of absorption of a certain wavelength (i.e. colour[1]) of light through a known thickness of a sample can be measured, which allows the concentration of an analyte in the sample to be determined.

Fluorescence: The amount of light emitted from a fluorescent sample at a given wavelength after being excited by light at a different (usually shorter) wavelength can be quantified. This also allows the concentration or presence of a target analyte in a sample to be measured. This type of measurement has particular utility in biological assays, as there are biochemical methods for attaching fluorescent tags to many biological samples of interest.

The following optical methods may be used to image samples (cells or small organisms, for example) on a microfluidic cartridge:

Microscopy: One of the most straightforward ways of collecting an image of a sample in a microfluidic cartridge is to use a conventional microscope. Off-the-shelf microscopes can be used for this purpose, or microscopes can be significantly miniaturized and incorporated into a dedicated reader for a given cartridge. In some cases, a portion of the optics of the complete microscope system can be moved onto the cartridge itself.

Lensless Shadow Imaging: A number of imaging techniques applicable to microfluidics do not use lenses. One example is shadow imaging, where a sample (which may be in a microfluidic channel) is placed as close as possible to a lensless camera sensor and illuminated from behind. The shadow that the sample makes on the detector is then imaged.

Lensless Digital In-line Holography: In this technique, a sample is placed at a small distance away from a lensless camera sensor and illuminated from behind with a coherent light source. The pattern the light creates on the sensor is then used to reconstruct an image of the sample by mathematical methods.

These methods are just a sample of the wide range of optical detection methods that can be implemented on a microfluidic cartridge. These and other methods can enable a broad range of clinically-relevant assays.

How are fluorescence measurements implemented in microfluidics?

Fluorescence, which is the emission of light from a substance in an energized state, is one of the most common things measured in microfluidic systems. Fluorescence measurements involve using a light source to excite a fluorescent sample, then measuring the light emitted from the sample, typically by using optical filters to isolate the emitted light by its wavelength.

There are a number of ways to induce and measure fluorescence on a microfluidic cartridge. In the most-straightforward method, the cartridge is used only to manipulate the sample and take it to a detection area, with the optics for both the excitation light and detection of the emitted light located outside the cartridge. However, some implementations may move some of the optics onto the cartridge itself.  Parts of the cartridge may be used as light guides, which confine the light to a certain path. These guides can be used to direct excitation light to the sample. In other cases, light inside a waveguide can even be used to excite substances on the outer surface of the waveguide, via what is called the evanescent wave. Fluorescence detection can also be parallelized on a cartridge by simultaneously measuring fluorescence at multiple sites on a cartridge using a camera and a microlens array.

An important use case of fluorescence measurement on microfluidic cartridges is the detection of fluorescent tags (also called labels or probes) linked to specific biological analytes using biochemical methods. Such tags are linked to a biological substance of interest, and their fluorescence is used to image or quantify the substance. Microfluidics are particularly useful for such assays, as both the preparation of samples as well as detection can all be done on a microfluidic cartridge. This approach can automate and simplify much of the work for the end user.

Optical systems are a critical part of many microfluidic platforms. In some cases, optical system components can be integrated directly onto a microfluidic cartridge, which has the potential to reduce the footprint of the overall platform. Many optical detection methods that enable us to quantify or image analytes in a sample are possible using microfluidics. Microfluidics can greatly simplify these techniques by taking much of the required sample preparation and optical alignment out of the hands of the end user.

[1] Speaking more precisely, the relative magnitude of light at different wavelengths is what determines the perceived colour of a light source. Light that is monochromatic (i.e., having a single wavelength) has a certain colour as determined by its wavelength, but some perceptible colours can be produced only by a combination of light at multiple wavelengths.