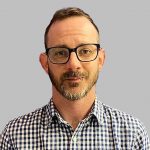 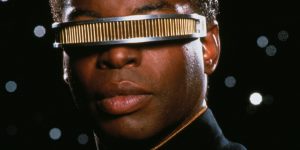 Real medical devices from the imagination of science fiction

Many shows, movies, books and videogames feature science fiction medical devices and technologies that seem otherworldly and far beyond our capabilities. We often can’t believe a lot of them are real because their impact on the characters is so dramatic. However, the imagination and creativity of a sci-fi writer can grow from science fiction into science non-fiction with time, scientific progress and design development.

This blog compares science-fiction medical devices with real world medical devices and technologies. When we push ourselves to think big, we can start the process of change. If we simply go with what we know is possible now, we will never move forward.

In one of 2019’s biggest sci-fi hits, The Mandalorian, the main protagonist is gravely injured in a battle.  With the severity of his injuries all we are left to think that his time is done and there’s no saving him from this situation.  When an ambulatory droid, IG-11, applies “Bacta Spray” to Mando’s wounds, Before our eyes his wounds heal, allowing him to not only survive, but literally erase the damage. 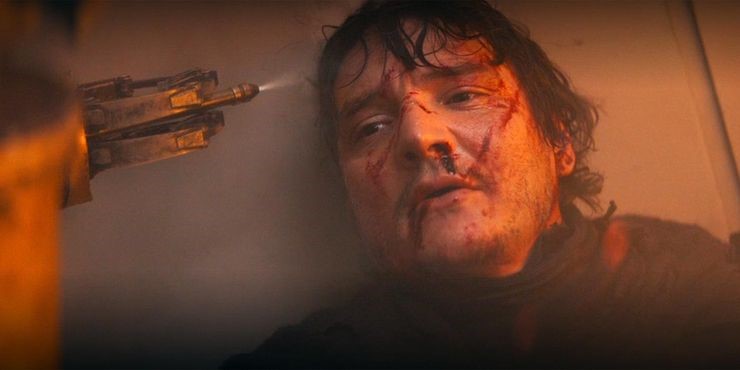 I’m not going to lie, but when watching the show, I was a little aggravated that a character’s wounds could simply be sprayed away. It seemed too fantastical and too easy of a solution to be realistic. Surely this is “movie magic” and not science.

Just think if this technology were real and not a fantasy from a galaxy far, far away….

A new product called ReCell from Avita gained FDA approval late last year and is currently being used in clinical trials with great success. The technology could replace skin grafts as the solution to treating severe (up to second degree) burns.  Skin grafts can take months of follow-up treatments, are extremely painful. and leave a lot of scarring. The Recell stem cell treatment can be applied relatively painlessly and reduce the treatment time to a span of weeks with all scarring eliminated in a couple of months.

The technology requires a physician to extract only a quarter sized biopsy from the patient, greatly reducing body trauma common to skin grafts.  From this relatively small sample (the process can treat up to 80 times that surface area), a slurry of live stem cells is created.  The slurry is loaded into the Recell applicator and then sprayed over the patients’ burns or wounds.  This process encourages the applied skin cells to grow and migrate until they cover the treatment area and integrate with the surrounding skin. It literally grows new skin over the wound. 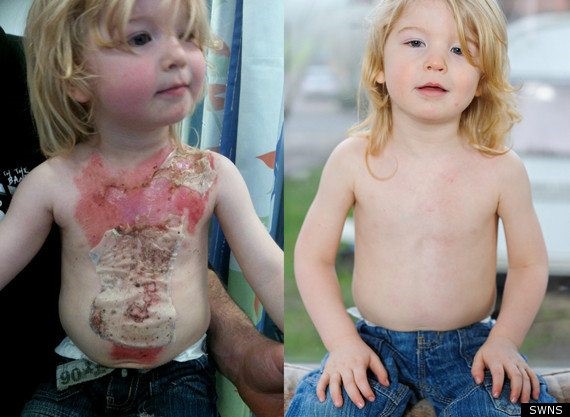 Zed Merrick is one of the first public success stories for Avita: Zed is a two-year-old who sustained second-degree burns over his shoulders and chest after a boiling cup of tea fell onto him at his home.

This whole process seems fantastical and would be easy to write off as a pipe dream. But, by taking that blue-sky fantastical idea, applying a scientific process to it, and grounding the concept in reality, we can truly create impactful change in people’s lives.

I’m sure that almost everyone who follows science fiction and medical device development (there are lots of us right?) is aware of the tricorder and the saga of its real world development. The device from the original Star Trek series was able to diagnose and take body measurements with a simple wave over the patient’s body. It has now a reality in several devices and another example of fantasy come to life. Star Trek’s imagination went far beyond that original device.  One iconic example is the VISOR worn by Geordie Laforge in the series Star Trek: The Next Generation.

Born blind, Geordie LaForge wears a VISOR “visual instrument and sight organ replacement”.  The VISOR device is worn like a band over his eyes and attaches to small input jacks on his temples.  VISOR scans the electromagnetic spectrum, creating electrical visual input, and transmits it into the brain of the wearer via their optic nerves. While the device does not deliver full spectrum sight, it does allow Geordie to see energy phenomena is the form of waves and shadows. 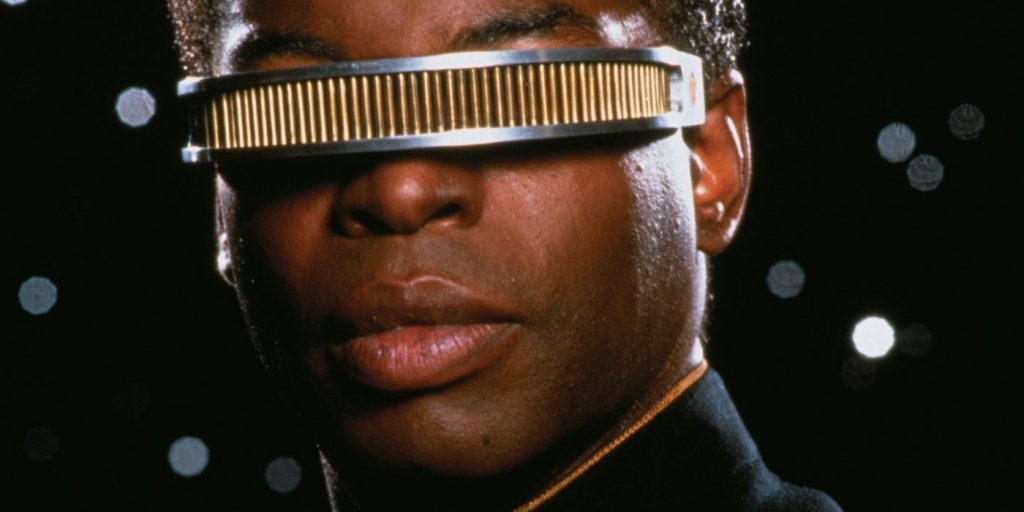 In the Star Trek universe, this technology advanced and developed over time.  Geordie’s VISOR was gone and replaced with cybernetic eyes In the movie, The First Contact.  These bionic eyes performed the same tasks of the VISOR much more discreetly.

Similar to the tri-coder, VISOR inspired the imagination of scientists who grew up with the show to explore what might happen if this idea could be true.   In the late-1990’s, their dream became a reality. And it has developed in a similar fashion to the Star Trek universe. Several companies developed technologies that were strikingly similar to the series implementation. For the sake of time (and space) I will only concentrate on one, but there are up to eight proof-of-concept prototypes currently undergoing clinical trials.

Early versions of many visual prostheses resembled the sunglasses form of the early VISOR.  The front of the device contains a small camera which communicates to electrodes implanted in the patient’s brain.

Bionic Vision Technologies (BVT and previously Bionic Vision Australia) has been developing bionic vision technology for more than a decade.  Their first concept, Wide View, combined novel technologies with previously successful implant materials. The process includes implanting a micro-chip with 98 stimulating electrodes into the suprachoroidal space (the outer layer of the back of the eye).

Signals sent from a small camera are processed by a wearable computer, then sent to the implant. The implant’s electrodes each fire according to a contrast grid processed by the computer. The result is the ability to “see” in a grid of 98 points in a grid. Think of a computer monitor with 98 pixels. While this may not sound optimal to someone with 20/20 vision, it is a drastic change for those with severely impaired vision.

Current test patients are able to see large letters and numbers, navigate space, and even potentially recognize facial features and movements.  This is life changing technology for someone who has never “seen” and has lived with the challenges that come with blindness. The technology is currently in clinical trials with devices implanted in seven participants. It is expected to gain approval in the next 3-5 years.

BVT is currently developing a device which would increase the resolution from 98 pixels to 1024. The process requires the microchip and electrodes to be implanted epiretinally (on the surface of the retina) with the potential of greatly increased vision ability. That would truly be moving into the realm of sight.

Of course science fiction isn’t only found in television series and movies, there are plenty of video games where we can take a look into what the future may bring.  The Fallout series of games takes place in a post-nuclear age where players need to navigate a contaminated world to complete missions, escape fallout shelters and (naturally)…battle mutants.  As with any videogame, players take damage which needs to be repaired. Due to the radioactive nature of the Fallout world, players also need to keep an eye on toxicity.  Too much untreated radioactivity and they’re finished.  When playing a videogame like this, players don’t want to stop in the middle of the game for too long while waiting for a medical diagnosis.   So in a world where anything is possible (of course) there is a machine that can examine and diagnose in a matter minutes to get players back and playing.

There are several medical devices called the Sympto-matic.  The Sympto-matic is a one-stop examination and diagnosis machine. Simply step into the booth, push a few buttons and the device scans the body to look for any injuries or ill-health.  Once scanned, players can administer whatever remedies that are recommended to bring them back to full health.  In essence, the Sympto-matic is a super quick medical device that lets players know how they’re doing and gets them back on their merry way in a matter of minutes.  This also seems like a great idea for real-world, fast-paced lives, if only it were possible.

Apparently it is possible. Forward is a membership based medical service in California that offers quick check-ups throughout the year as opposed to one full scale exam annually.  In fact, with a membership, clients can pop in at any time for a checkup.  Utilizing state of the art technology, artificial intelligence, well thought through user experiences and a medical staff, Forward enables a patient to pass through a checkup in 20 minutes.

One of the innovative technologies they use is a full body scanner. While waiting for an appointment using artificial intelligence (AI) scheduling which accounts for a patient’s tendency to be late or early (average wait time is 1-2 minutes), the patient steps onto a body scanner diagnostics tool built by Forward. With a variety of sensors and red light spectroscopy, the scanner takes readings of a patient’s height, weight, body temperature, heart rate and blood oxygen levels all in the span of approximately 60 seconds.

This data is sent to Forward’s backend system and processed in 45 seconds. Here is where AI takes over.  Based on a patient’s most recent scan results, previous scan results and medical history, AI is able to examine minute irregularities in readings and correlate potential health issues. It will also suggest diagnoses and treatment plans based on patient information.  Forward realizes that there is no substitute for human interaction in the medical sphere, so from there patients go into an exam room and meet with a doctor.   In the exam room, there’s a massive touch-screen display on the wall where the patient and health care provider can review the current health status. AI listens to the conversation between doctor and patient, capturing important data for a medical file which appears on the screen in real-time.  If further tests are required, Forward has special facilities to collect urine and blood samples quickly, cleanly and privately.

The combination of technology, AI and a human doctor are providing not only rapid diagnosis, but check-ups and health monitoring that fits into busy lives. This allows patients to check their medical status more frequently. When you check more frequently, you can follow your health trends and catch issues quicker.

I’ve covered only a few examples of devices that were dreamt of and through time and rigor became reality. By looking to current science fiction we may possibly catch a glimpse of what’s to come in the next 10-20 years.

Many fantastical dreams of impactful change do not occur on the big screen, but in the hospitals, laboratories and offices of those who work in medicine and medical device engineering.  When we push ourselves to think big, we can start the process of change. If we simply go with what we know is possible now, we will never move forward.

Only when we start from a place of “what if”, can we truly hope to achieve innovation.

Mike Loveless is an Industrial Designer at StarFish Medical. Based in Toronto, Mike studied Industrial Design at Humber College and has 15 years experience in consumer product design working both freelance and with full service design firms.  Mike is excited to be part of the Starfish team and contribute to the meaningful projects that we do. This is Mike’s first StarFish blog. He would love to hear from readers about their favorite sci-fi medical device.