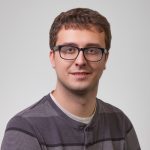 Silicon photomultipliers are an exciting technology enabling applications previously only available with large, bulky PMTs to be implemented in small, low-cost, low-power form factors. If you have demanding low-light detection requirements for an upcoming project where a PMT would be too bulky, expensive, or fragile, I strongly encourage you to take a look at silicon photomultipliers.

The gold standard technology for detecting small amounts of light is the photomultiplier tube (PMT), a vacuum tube device invented at RCA in the mid-1930s.

While most other vacuum tubes in industry have been replaced by solid-state technology, the photomultiplier is still the best choice for uncompromising low-noise detection of very small signals, with unparalleled dark count, low-noise, and sensitivity. 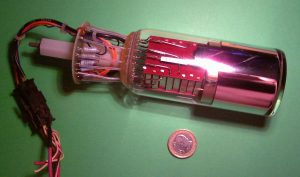 PMTs, however, are not without a few notable drawbacks.

For many applications, the benefits of a PMT (namely: extreme sensitivity, good dynamic range, and very low noise) outweigh these drawbacks. However, there are other applications which in addition to good sensitivity and low noise also demand low-power, low-cost, and small form factors.

A recent development in low-light detection offers the promise of the sensitivity of a SPAD with the dynamic range of an APD. A new device, the silicon photomultiplier (SiPM), is now finding its way into low-cost devices. These devices were originally invented at the Moscow State Engineering Physics Institute in the late 1990s, and over the past decade have been commercialized by a number of vendors.

The name is something of a misnomer: a silicon photomultiplier has very little in common with a photomultiplier tube in terms of method of operation. Rather, the name is mostly a marketing choice to highlight the very high sensitivity and dynamic range of these devices.

Silicon photomultipliers are essentially a large array of tiny single-photon avalanche diodes, typically on the order of 10-100 um in size depending on the particular device. These SPADs are arrayed in parallel with integrated quenching resistors on-die. This has a few important advantages over a conventional, large-area SPAD:

Dark count performance of SiPMs is worse than a PMT, but performance is still more than acceptable for many applications. Dark count is generally a function of array size and pixel pitch as well as process variation from vendor-to-vendor. As a benchmark, one leading vendor produces devices which have a worst case room-temperature dark count on the order of 96 kHz/mm2­ – plenty acceptable for many applications. SiPMs can also be actively cooled to supress thermally-generated carriers and reduce dark count rate. Cooling a SiPM to -20°C will improve its dark count rate by a factor of around 50 to 100 over its room temperature value.

The lower bias voltages of SiPMs is also very useful for many applications, such as handheld devices. Some SiPM vendors offer devices which have breakdown voltages well under 40 V, which means that bias voltage generation can be accomplished with a simple single-stage boost converter from a battery. It also greatly simplifies safe design by relaxing insulation, creepage, and clearance requirements.

SiPMs are much more rugged than PMTs, as they are solid-state semiconductor devices which are usually packaged as plastic surface-mount parts. Since they do not rely on dynodes like a PMT, they are also essentially immune to magnetic fields, enabling their integration in environments where a PMT would not function. For example, the magnetic field immunity of SiPMs have enabled simultaneous PET/MRI scans. With conventional PMTs, this would not have been possible.The magnetic field of the MRI would have prevented the PMTs from operating.

Finally, one of the most attractive features of the SiPM is their cost. Devices can be purchased in single quantity for under $100. Depending on the particular device and vendor, this price can drop into the $10-$30 range at large quantity. Most SiPMs are available in surface mount packages which are easily handled by standard reflow soldering processes, making their integration into a system cheap and straightforward.

Peter Kazakoff wrote this blog as a StarFish Medical Electrical Engineer. A graduate from the University of Victoria, Peter received the Chris Denny Memorial Award for Innovation in 2017. He worked on a variety of medical device projects at StarFish, and recently relocated to Quebec to follow his dream and join the Canadian Space Agency Engineering training program. We wish Peter great success!