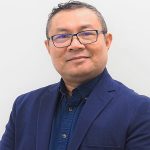 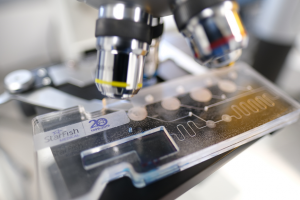 More than a year into the pandemic, there have been over 120 million people infected by the COVID-19 virus globally and almost 3 million deaths. Over 400 million doses of COVID-19 vaccines have been administered1.

The inability to effectively identify asymptomatic carriers was a driver of the spread. What if we had the ability to test for infections quickly and at massive scale early on? What if we could efficiently identify the asymptomatic spreaders and isolate them? What if we had more efficient, rapid results, and deployable, affordable tools capable of detecting, screening and surveilling large numbers of pre- and post-infected patients? Such a tool would be a game changer that could prevent pandemics and save many lives.

Timely and Rapid Diagnostics as the Solution

Detecting infected individuals prior to the development of symptoms is crucial for preventing the spread.  Unfortunately, current diagnostic detection platforms can fail to detect infection during the asymptomatic stage from zero to around 7 days.  To date, our health system has used three major categories of diagnostic testing: molecular diagnostic test methods such as the reverse transcription polymerase chain reaction (RT-PCR) and Loop-mediated isothermal amplification (LAMP); antigen tests (both rapid and laboratory based); and serological assays that detect the presence of antibodies in the blood.

Molecular and serological tests are the recommended and accepted diagnostic tests because they offer high sensitivity and specificity.  Molecular tests are the gold standard in detecting infection prior to the development of antibodies, after which the serological test becomes valuable. The World Health Organization (WHO) recommends the use of these tests during both asymptomatic and symptomatic stages depending on the probable day of infection. However, both tests require from 12-72 hours to get results from existing platforms as the patient’s sample must be sent to a central laboratory. Waiting days for a result is expensive and worrisome. Antigen test strips are an alternative to detect viral antigens, however, the sensitivity of this type of rapid test is low

Microfluidics as Enabling Tools in Diagnostics

Microfluidics is a fluid handling technique that allows the manipulation of fluids at a micro scale using channels, chambers, fluid paths and other sub-millimeter features3.  It uses small fluid volumes and enables the control of fluidic transport and mixing of molecules to enable separation and detection of analytes with high accuracy and sensitivity.

Microfluidics allows laboratory assays to be miniaturized into a small footprint.  Complex diagnostic assays that are conducted in central laboratories can be implemented at the point-of-care or in places that require early detection or screening. Microfluidic devices can take the form of a cartridge or a lab-on-a chip. This technology delivers portability and rapid deployment and detection. It can implement an accepted molecular or serological assay in a disposable cartridge delivering laboratory accuracy.

Point-of-care (POC) devices with integrated microfluidic processes can provide rapid diagnoses as quickly as 10-15 minutes after collection of samples from patients. Such devices could be used in offices, homes, schools, public places, and even in airports without the need for central laboratories. With microfluidics in diagnostics, outcomes will be improved by rapidly providing the information that health professionals need to prevent the spread of disease.  POC device advantages include affordability, accurate and reliable output, ease-of-use, robustness, rapid results, and portability.

Molecular-based PCR tests rely on their ability to detect the presence of a virus by amplifying its genetic materials (as opposed to detecting the presence of the body’s immune response, i.e., antibodies). Detecting viral RNA before antibodies form or early symptoms begin to manifest is a powerful tool in combating COVID-19.  PCR gives a good indication of who within a population is infected during the asymptomatic stage, which provides public health officials a clearer picture of the spread of a disease.

Several microfluidic enabled molecular tests are available and approved under the EUA4.  These tests include a cartridge with a kit of reagents. Samples are collected using a nasopharyngeal swab and placed into the cartridge. Microfluidics manage the sample preparation, fluid transport and storage, mixing of reagents during the amplification, and reading of the results using electrical or optical means. Microfluidics streamlines the assay workflow and enables non-trained individuals to run the assay with minimal instructions. The can easily fit on any desktop. The cartridge is one-time use and can be easily disposed to prevent contamination.

Deployment of microfluidic-enabled molecular diagnostic tests may not increase throughput compared to central laboratory RT-PCRat. However, they could provide a method for decentralized testing near the point-of-care, thus giving a more complete picture of the spread and enabling a rapid response.

Another diagnostic tool is serological testing5. Serological tests detect the presence of viral antibodies rather than the presence of the virus. Consequently, such tests are not appropriate for detecting the disease during the early stages of infection. Instead, they determine the immune response of the individual to a virus. Our immune system produces different types of antibodies at different stages of an infection.  After an infection, our immune system tries to fight back by producing antibodies specific to the virus. Research suggest these antibodies can be reliably detected 14 days after a person is infected with COVID-19.

Using serological tests, it is difficult to determine who is currently infected as the antibodies are generated a week or two after the initial infection when the virus may have already been cleared from the infected person. The most significant contribution of a serological test is that it can be used as a surveillance tool to determine what proportion of the population has been infected. With these facts in mind, serological diagnostic tests will soon be required for millions of people for screening and surveillance post infection, and after the vaccine has been widely administered.

Microfluidic-enabled serological diagnostic testing has been developed in the past several years to detect the presence of antibodies. Similar diagnostic tools have been developed and used in research to manage sample preparation of blood and its by-products.  Microfluidic technologies for blood collection, metering, lysing, mixing and detection can be adapted for serological test cartridges that could make such testing easy, with rapid, cost effective results. A microfluidic cartridge that uses a drop of patient’s blood to determine their immunity to infection using a portable reader at a point-of-care would be an invaluable tool.  With the increasing number of recovered and vaccinated individuals in the population, the need for such an antibody test is crucial in our recovery from the pandemic.

In contrast to molecular and serological diagnostic tests, antigen-based tests6 offer a much faster turnaround time of less than an hour. These tests detect specific proteins located on the surface of the virus. Similar to the molecular test, the sample can be obtained from a nasopharyngeal swab or in saliva.  Microfluidic antigen tests are very simple to use and can be carried out by non-professionals. The required cartridge has a low cost per test and is disposable. A portable digital or optical reader is used to read and interpret the results. Such a test would mostly be applied at the point-of-care, but can also be performed at pharmacies, clinics, or even at central laboratories.

The Public Health Agency of Canada’s National Microbiology Lab (NML) developed an interim guidance on antigen testing6.  The guidance provides information on the use of rapid antigen detection tests at point-of-care. Based on the guidance, a positive result from an antigen test is considered as a “presumptive positive” until a reference molecular test (nucleic acid-based, i.e. PCR) method confirms the positive result.

In the case of negative results, further testing using a molecular method is done if the probability of COVID-19 infection in the individual remains high (i.e. there is a known contact, an outbreak, or high community transmission). Health Canada considers sensitivity below 80% to be unacceptable for authorization as sensitivity below that level produces too many false negative results.  However, due to the simplicity of the antigen test, the test will have a very important role to play in the next phase of the pandemic response when the vaccine has reached enough of the target population to create herd immunity.

Molecular and serological diagnostic tests are very important to prevent the spread of infection. Health organizations rely heavily on molecular testing using real-time reverse-transcriptase polymerase chain reaction (RT-PCR) or PCR as the primary tool for infection detection in asymptomatic and symptomatic patients.  In the absence of molecular tests, antigen tests provide quick and sufficient information for triaging patients, although confirmatory molecular testing is required for positive results. Serological diagnostic tests are equally important for their ability to determine the level of antibodies present in a patient a few days after infection, and the level of immunity after infection, or after having the vaccine.

In all the diagnostic tests mentioned, microfluidic technology is already being implemented as part of the diagnostic tools. Microfluidic technology will enable these tests to be carried out with shorter turnaround times, high accuracy results, and lower cost per test. I look forward to seeing the widespread adoption of these diagnostic tools where detection is paramount in curbing the spread of infection.  With these and other tools in hand, we will one day be able to say that we won the battle against the COVID-19 pandemic.