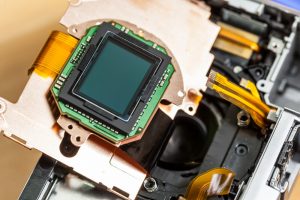 The key takeaways are:

Greater irradiance on the sensor generates a larger signal without increasing the sensor’s read or dark noise (as these originate from the sensor’s electronics[1]). There is therefore no additional detriment to either the SNR or achievable dynamic range of the sensor from these noise sources as the light level is increased. The shot noise is inherently increased with the increase in signal. However, assuming the sensor is not saturated (i.e., it has not reached the signal level where no more signal can be collected), the SNR will nonetheless be increased since the shot noise scales as the square root of the signal counts, and the SNR for a given number of counts is therefore approximately .

Under certain conditions, short exposure times are necessary. For example, imaging fast-moving objects using long exposure times leads to blur due to changes in the object’s position/orientation during the light collection. Blur is unlikely to be desirable in non-artistic applications (although some exceptions exist, such as streak cameras) and so short exposures may be required to avoid it. A short exposure time may also be required to prevent saturation if a high incident irradiance cannot be reduced (though an attenuating optical filter can often be used instead). Finally, if the sensor is used in a video application, the maximum exposure time may be limited by the required frame rate, which will be discussed in the next section.

Finally, the signal output from a camera sensor may be increased by increasing the sensor’s gain, which refers to the amplification of the signal recorded by the sensor. Gain can be applied in a number of non-equivalent ways and the effects of changing the gain can depend on the details of the sensor’s electronics[2], particularly its analog-to-digital converter (ADC).

After photoelectrons are accumulated on a sensor, read out and possibly amplified, the ADC measures the accumulated charge and converts it to a numerical digital output. The number of possible digital output levels (or analog-digital units: ADUs) is determined by the ADC’s bit depth. An ADC with a bit depth of X can output 2X distinct signal levels. For a given sensor and gain, there is a certain fixed number of photoelectrons required to move from one signal level to the next higher one.

In some cases, gain may be applied after the conversion to digital, which may simply mean that the numerical digital output from each of the sensor channels is multiplied by some factor (sometimes called “digital gain”). In that case, the SNR is not increased as the noise and signal are both multiplied by the same factor (supposing the increase in gain does not increase the signal above the maximum ADU, in which case information in high signal areas of the captured image would be lost). Furthermore, the maximum possible dynamic range will be decreased, as the noise floor will be increased and the maximum signal level will be decreased (for example, if a captured signal has a maximum value of 256 after conversion to digital and 2× digital gain is applied, any digital signal with a value initially over 128 will be saturated). For dark images, it may nonetheless be necessary to apply digital gain to brighten the image to a level that is practical for a human to look at.

In some sensors, gain can be applied before the conversion to digital. Gain applied this way usually increases both the signal and noise by a similar factor, and so the effects on the SNR and maximum dynamic range are similar to those of digital gain. However, if the number of photoelectrons per ADU at a given gain setting is greater than 1, applying more gain can “spread out” the signal over more ADUs by effectively reducing the number of photoelectrons per ADU [2]. Assuming information isn’t lost to saturation after increasing the gain, this method allows for a greater number of light levels to be distinguished in the digital output. In some cases, particularly when signal levels are low, increasing the gain can increase the dynamic range in the captured image (the ratio of the highest to lowest measured signals; not to be confused with the maximum dynamic range of the sensor). To take a concrete example, if we have a sensor and gain such that there are 100 photoelectrons per ADU, and we capture an image such that various signal counts of fewer than 100 photoelectrons are captured on the sensor, all signals will produce the same output from the ADC the maximum possible dynamic range of the output digital image will be 1:1 (i.e., it will have no dynamic range). However, if a gain of 10× is applied before the conversion to digital, the signal will instead be output into up to 10 ADUs thus allowing more measured light levels to be distinguished. Furthermore, supposing the dark and read noise amount to less than 10 photoelectrons prior to increasing the gain, the maximum dynamic range in the output digital image will be 10:1. This method does not apply to sensors/gains that take one or fewer photoelectrons per ADU, as each additional photoelectron already occupies a different ADU upon conversion to digital in that case. 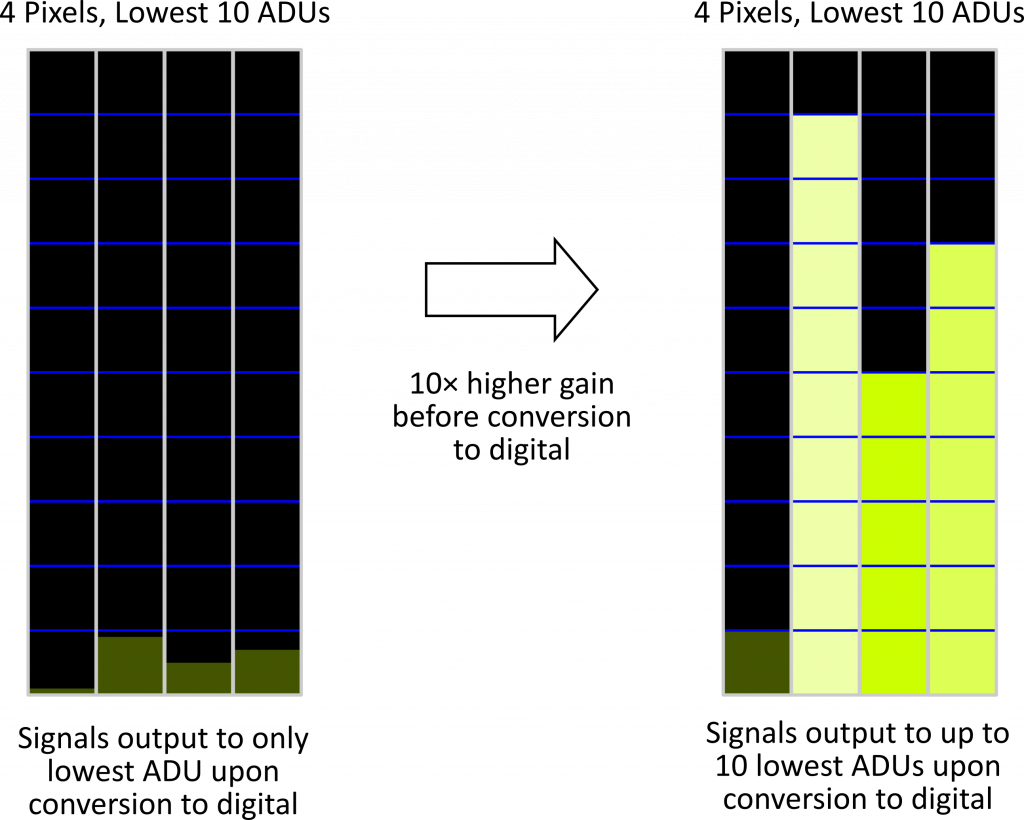 In general, the best practice to optimize the SNR and dynamic range in a measured signal for a given sensor is to first increase the incident irradiance as much as possible without saturating. Next, if necessary, increase the exposure time such that the collected signal is near saturation (to the extent that the specific application allows). If the signal is still not near saturation, gain can then be applied to brighten a captured image or to increase the number of gradations in the output digital signal (assuming gain is applied before the ADC and the number of photoelectrons per ADU is greater than 1 before increasing the gain). However, adding gain reduces the maximum possible dynamic range of a sensor and does not improve the SNR in most cases. However, in cases such as that described immediately above, the dynamic range in a captured image can be effectively improved by increasing gain before the ADU.

Another consideration related image capture time is the sensor’s frame rate. This term refers to the rate (in Hertz, Hz, or equivalently, frames per second, fps) at which a sensor can collect separate images. Requirements for frame rate can vary greatly depending on the application. For capturing still images, a low frame rate is often acceptable, provided the time to output an image does not cause excessive waiting after image capture. On the other hand, if you wish to record a series of images of rapidly changing scene, a high frame rate may be required.

Typical frame rates for video range from 24 Hz to 60 Hz. (24 Hz is the frame rate at which films have traditionally been shot and displayed, and many continue to be shot at this frame rate today.) Video displayed at a 60 Hz frame rate will result in the perception of smooth motion for most people[1].

In cases where a real-time video feed is being used, a low frame rate increases perceptible latency in the displayed signal. Supposing video is being captured and displayed at 30 Hz there will be at least a 1/30 s delay between each image: motion during this delay time will not be seen on the screen. This delay is significant enough to be perceptible and is not optimal if real-time feedback is being used, such as if the camera is being used to monitor precise surgical operations. Ideally, video used for such a purpose should be captured and displayed at a sufficiently high rate such that the motion is perceived as smooth and instantaneously responsive to the end user’s actions.

Higher-than-typical frame rates can be used capture very fast changes in an imaged object or to rapidly capture data. Certain medical applications, such as some implementations of flow cytometry and optical coherence tomography (OCT), can benefit from such high frame rates. In flow cytometry, which is a method of investigating the characteristics of cells, fast camera sensors can enable hundreds of cells to be imaged and characterized in less than a second. In OCT, fast camera sensors can be used to enable multiple 3D volumes (of biological tissue, for example) to be imaged in a single second (imaging such 3D volumes using camera-sensor-based OCT requires the collection of many camera frames). Under some conditions, rapid data collection can also be useful for improving data quality through averaging, without unacceptably increasing the data collection time.

Cameras capable of high frame-capture rates have become more commonplace in recent years. A number of sensors used in smartphones today are capable of capturing video at up to 960 Hz [3], which until recently would have only been possible using specialized “high-speed” cameras. The fastest camera sensors today can reach frame rates well into the kHz regime (for example, some line camera sensors can reach over 100 kHz frame rates). For technical reasons, the frame rate of camera sensors is sometimes tied to the resolution at which the image is taken, with the maximum frame rate only being achievable when a reduced resolution is used (either by combining the signal from multiple pixels – i.e. binning – or sampling only a subset of the total pixels).

This blog series discusses various things to consider when choosing a camera sensor for your medical product.

In this blog I have discussed the factors that should be considered to capture images/signals with the highest quality possible. I discussed the incident light irradiance, exposure time and sensor gain and how they affect the signal-to-noise ratio (SNR) and/or dynamic range. I have also discussed the impact of frame rate – the rate at which images can be captured and subsequently displayed.

The first entry in this blog series gave an overview of signal and noise sources and associated figures of merit, and discussed the impact of the sensor resolution and pixel size. The next blog will focus on the available camera sensor types and technologies.

[1] Dark noise, shot noise and read noise were defined in the previous blog in this series.

[2] In consumer cameras, gain is often related to the ISO setting which, roughly speaking, is used to approximately match the brightness of an output image for a given light level to that of old film photosensitivity standards (i.e. film speed). However, different consumer cameras implement ISO settings in different ways that are not all equivalent to increasing gain [4].

[3] Although 60 Hz video will be perceived as smooth motion to most people, some people can nonetheless see a further enhancement in perceived smoothness at even higher frame rates. Displays with frame rates higher than 60 Hz (such as 144 Hz displays) have recently become popular among some users, particularly PC gamers.

Tags: What to Consider when Choosing a Camera Sensor for a Medical Device