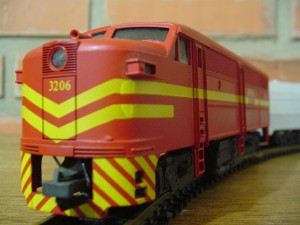 Working on medical devices involves a lot of science, regulation, process and other things that often don’t appeal to executives, entrepreneurs, or my children.  On the other hand, my three year old son is really keen on trains.

He’s learned that those really cool toy trains that go by themselves do this because they have an electric motor in them. At some point in the past I explained to him and my six year old daughter what I do at work; they put two and two together and asked if we could build a motor. I could not let an opportunity like this pass me by.

So on a rainy Saturday morning we brought a bunch of stuff to the kitchen table: Lego, magnets, wire, batteries and other bits and pieces. Then we built a motor. Given their ages, I knew it was too much to hope that they would follow exactly what was going on or even remain focused and entertained for the whole time. Mostly they were interested in the outcome rather than the details of how to get there.

A bit surprisingly, it all turned out to be a spectacular success and they were both excited to see it work, and before lunch too! Mostly I’m very pleased I managed to hold their attention for the bulk of the time. As a dad, that is pretty much all I could have hoped for.

Afterwards I reflected on the process and couldn’t help noticing parallels with what I do at StarFish.

At work, things are quite a bit more complicated than science experiments like this one. They encompass all sorts of additional aspects like usability, regulatory, finance, biology, styling and tons of varied technologies.  But broadly speaking my kids bear some similarity to our clients.

Some clients mostly just want the job done and only want to know when and how much; others are very keen to be embedded in the development process. I recognize this and I’m very comfortable working with both sorts, and anyone in between too.

Having said that, I’m eagerly looking forward to the days and years to come when my kids get more and more interested in all of the cool little details of how I take an idea and turn it into reality. At least I hope they will.

In the meantime, I’ll be content to watch this video of our morning building an electric motor with Lego and batteries.  Just like I enjoy working on challenges for my clients and seeing their happiness when we turn ideas into reality. It tends to bring out the inner three or six year old in them as well.

Kenneth MacCallum, PEng, is a Principal Engineering Physicist at Starfish Medical.     He works on Medical Device Development and tries to leave the office at the office.  Science on the other hand…